In 1992, historically colonized peoples of the western hemisphere and their allies organized events to denounce the errant voyage by Columbus in 1492 and the ensuing 500 years of colonialism, genocidal conquest and racism. In Cleveland, a multi-racial group formed to plan a remembrance.

After a few meetings the Indigenous participants asserted their sovereignty, and the group agreed to follow Indigenous teachings and leadership and to adhere to an Indigenous majority. The group consisted of activist organizations and individuals native and non-native. The group held a major protest at Public Square and named itself the “Committee of 500 Years of Dignity and Resistance.”

After the Quincentary, the Committee decided to focus on the name and mascot of the Cleveland Major League Baseball team. The Committee of 500 Years immediately received support from the American Indian Movement Grand Governing Council and the National Coalition against Racism in Sports and Media. That struggle has remained our primary purpose to the present day.

In the spring of 1997, the Committee officially became a 501(c)(3). The founding board members were: Juan Reyna, Pearl Simon, Ferne Clements, Marjorie Villafane, and Elsie Baldwin.

The Committee of 500 Years continues to educate the public through an annual academic conference, partnerships in presentations with schools, colleges, and progressive organizations; education on the inherent racism of the Cleveland MLB name and logo, and community engagement through partnerships in grass roots organizing.

The Committee of 500 Years of Dignity and Resistance collaborates in Northeast Ohio with the Lake Erie Native American Council, American Indian Movement of Ohio, and many local groups also resisting and fighting for dignity such as the Michigan Chapter of the National Coalition in Sports and Media, Showing Up For Racial Justice, Amplifying Black/Indigenous/POC Voices (AMP) Northeast Ohio, Black Lives Matter Cleveland, The Inter Religious Task Force, and the Democratic Socialists of America – Cleveland, OH.

The Committee is also part of the Cleveland Indigenous Coalition which has received support from dozens of national and local businesses and organizations in support of the work to change the Cleveland MLB team name.

The Committee of 500 Years of Dignity and Resistance is a grassroots non-profit 501(c)(3) organization. All donations are tax exempt. 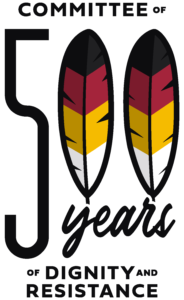